Recently, the Delhi High Court decided the case of Mankind Pharma Limited vs Novakind Bio Sciences Private Limited wherein an order directing an ex-parte ad-interim injunction was granted in favour of the plaintiff company, Mankind. The court directed the defendant company, Novakind, to halt the manufacturing, marketing, and/or selling any pharmaceutical product bearing the suffix ‘Kind’ or any other similar mark which may violate the plaintiff’s intellectual property rights.

The plaintiff sought for a temporary injunction against the defendant by the way of restraining them from using the plaintiff’s family of marks with the word ‘Kind’ as an element of a brand name, ‘Novakind Bio Sciences Private Limited’, ‘Defzakind’ as a brand name for medicinal and pharmaceutical preparations.

The plaintiff was one of the largest pharmaceutical companies in India and held proprietorship over the mark ‘Mankind’ with 78 registrations in 45 classes. The mark had been certified as a well-known mark by the Registrar of Trademarks. The plaintiff also held 120 registrations in class 5 wherein the suffix ‘Kind’ had been prominent throughout different marks like ‘Dexakind’, ‘Dentakind’, ‘Metrokind’ and ‘Moxikind’. Based on this, the plaintiff claimed that the suffix was a crucial feature in its family of marks. 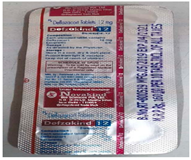 They claimed that the defendant is using misleading insignia on both of its marks. The mark ‘Defzakind’ was portrayed as a valid mark, the application for which stood abandoned due to non-filing of counterclaim. ‘Novakind Biosciences’ was depicted as a registered mark but the application of the same was in process.

It was submitted that the defendant was defrauding the public by placing on record the data extracted from the master data records of the Registrar of Companies which showed that the defendant’s registered office is in Lucknow, Uttar Pradesh, contrary to the address which has been published on the product.

The court cited the judgment of the Supreme Court in the case of Cadila Health Care Ltd vs. Cadila Pharmaceuticals Ltd wherein it was held that confusion between medicinal products can be life threatening and the test of confusing similarity is modified when pharmaceutical products are involved.

Further, the court took a more serious approach towards deciding this matter and noted that “the defendant is probably resorting to misrepresentation regarding the registration of its trademarks as well as the location of its registered office, on the body of its products. Given the fact that the products of the defendant are pharmaceutical products, this is a serious matter, and entirely justifies the prayer of the plaintiff for ad interim injunction.”

The matter has not been decided in its entirety and further hearings are scheduled.

This case highlights the grave consequences confusing trademarks can have, especially in the case of pharmaceutical products. A slight mistake can lead a consumer to fatality. While deciding or choosing a trademark for any medicinal product, the owner must conduct due diligence to avoid similarities. The trademark registry assists in this regard. Also, the details related to the name of the company, address, consumer helpline, must be legible and clear so that a complaint can be seamlessly processed without misrepresentations. Prime importance must be given to the benefit of the consumers.

Pharmaceutical trademarks require due diligence and a higher level of scrutiny. An infringement or a lapse may have grave consequences. Delhi High Court reiterated this position in its latest judgment, as summarized by Manisha Singh and Simran Bhullar.

The article was first published in IP Link Asia.