Can a registered design serve as a proof of novelty? The Delhi High Court said no! In a latest case where the parties were in dispute over a trade mark name for petroleum jelly, the design of the container was also claimed to be infringed. The Plaintiff contended that since they have a registration for the design, it automatically becomes novel. But the Court ordered otherwise. 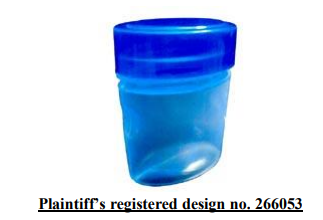 The Delhi High Court, in its order dated November 1, 2019, in the case Mehra Cosmetics (the Plaintiff) versus Ram Kumar Gulati & Ors. (the Defendants), refused to grant an injunction for design infringement on the ground that the Plaintiff’s registered design lacked novelty as numerous products are available in market in similar or identical containers.

The suit started out as both a trademark and a design case and instituted by the Plaintiff against the Defendants seeking permanent injunction for:

On December 6, 2016, the Court passed an interim injunction qua trademark issue against the Defendants restraining them from using the word CHEF in conjunction with the word BLUE or any other marks deceptively similar to the Plaintiff’s trademark BLUE CHIEF for selling White Petroleum Jelly or similar products. However, the Court did not grant injunction on design infringement holding that there is no novelty in the design of the container of the Plaintiff’s registered design, as a large number of other products are available in the market in similar container.

In September 2019, the suit was brought before the Court for framing of issues however it was found that there was no factual controversy. The suit, though filed in 2016, was treated as a commercial suit by the Delhi High Court. The Commercial Courts Act, 2015 entitles the commercial divisions to summarily dispose of a suit if it finds no ‘real prospect’ in the claim of the defence.

The counsel for the Plaintiff contended that since the Plaintiff had obtained a certificate of registration of the design of the container; it will establish novelty. With regard to the plea of design infringement, the Court discussed that the process of design registration is substantially different from that of trademark, wherein an opportunity is given to others to object. Merely because registration has been obtained, it cannot be said that design is valid. In this regard, the Court placed reliance on pronouncements made in Mohar Lal, Proprietor of Maurya Industries versus Sona Paint & Hardware 200(2013) DLT 322, Aashiana Rolling Mills Ltd versus Kamdhenu Ltd (2018) DLT 359 and Vega Auto Accessories (P) Ltd versus S.K. Jain Bros Helmet (I) Pvt. Ltd 2018 SCC Online Del 9381.

Further, the Certificate of Registration of the Plaintiff’s design shows that the Plaintiff has claimed novelty in the ‘shape and configuration of container’ without specifying any particulars. When enquired, the Plaintiff contended that novelty resided in the ring at the centre of the container however the same was not claimed in the registered design particularly in the front, back, left and right side view of the article. Thus, merely because the Plaintiff had obtained design registration for the container, it would not make the design novel. The Court in its earlier interim order/ judgment held that there is no novelty in the Plaintiff’s design as a large number of other products are available in the market in similar containers.

In conclusion, the Delhi High Court of the opinion that no purpose will be served in putting the Plaintiff’s claim for infringement of the design to trial and the same can be summarily dismissed. Further, the Court passed a decree in favour of the Plaintiff and jointly and severally against the Defendants of permanent injunction in terms of the pleadings of the Plaintiff.