In the first article of this series, we explored the different types of searches and the aim of conducting each of them. For quick recall, let us list them by name here:

A State of the art search

Before we proceed further and see what each type of search entails, we have to take at least a brief look at some of the principles behind concepts such as why does a government grant a patent, what is novelty, what is non-obviousness or inventive step and so on.

W) A government grants a patent as a quid pro quo. That means, “a favour or advantage granted in return for something”. In the case of patents a country’s government grants a patentee the right to stop others from practicing the patentee’s patent without the patentee’s permission, provided, the patentee reveals to the government a new invention that the government is not already aware of. In this context “the government being aware of an invention” means that such an invention is not revealed to the public in any form. For example, the invention has not been published in any report, in any language, in any medium, anywhere in the world, including public use or demonstration of the invention on the date of the application. And since patents are granted by the government of a country, it has jurisdiction only in that country.

X) Once a patent application is made, it is published only after eighteen months. Until then the invention remains a secret. One effect of this is that if one invents something today and do a patentability search, even if the same thing has been invented by someone else and a patent has been applied for, no one will know about it. So, one may apply for a patent and it may not be granted because there is a patent application describing the same invention but with an earlier date.

Y) A patent has detailed description so that a person of ordinary skill in the art can practise the invention disclosed in the patent if given the patent.

Z) When we say that a patent is infringed it means that the claims part of the patent are infringed. With these in background, let us see what each type of search means.

State of the art search (A) is the least intensive search. It means that all databases – patent, scientific, and general online databases and also advanced text books, handbooks, datasheets and so on – are searched without considering when it was published. The search may be done mainly using keywords and their synonyms, on the net. If any relevant patents are found, their claims may be studied. Otherwise it is mostly to know what the state of the art is. Even if different but related technologies or solutions are found in unrelated documents the information is gathered and used as suitable.

The reference document for this search may be the project proposal with a statement of the purpose or the problem that the project hopes to solve.

Solution search (B) This search is similar in its scope to (A). However, the following points must be kept in mind.

If a solution is found in a patent and it is still in force, the user may have to obtain a license from the patentee for a fee if the user wants to practice it. Alternatively, an invalidation search may be done to find if the patent is valid and then a decision taken. Otherwise, taking a hint from that patent a different solution may be invented. This is often called a work around.

Additionally, assume that a patent is obtained only in one country that is different from the country of the team looking for the solution. Assume also that the team does not plan to operate in the country in which the patent is in force. Then, it is free for use in all other countries. If the term of the patent has expired, it is said to have fallen into the public domain and is free for use by anyone. It is also possible that the solution is described in the description part of the patent but not claimed in claims. Then also it is free for use. It is prudent to consult patent professionals before taking any such decisions.

The reference document for this search is aclear statement of the problem for which a solution is sought.

Even though the search process for patentability search is the same as (A) above, there are some differences. Whereas in (A) there may be only be a problem the research and development activity aims to solve, there is no solution. But with patentability search (C) the solution is already defined and the search is oriented towards finding if it has already been revealed in any document at the time of the search. A searcher may search with keywords related to the problem in the case of (B). In the case of (C) the keywords may be from either the problem or the solution or both.

Further, with (A) all documents offering any solution, including partial ones, are welcome. But with (C) it is preferable to have the complete solution in one document. If not, at most two documents may be looked for, at least one of them having some suggestion that the two can be combined. The reasons for this condition is too involved to be dealt with here. Suffice to say that this is what the searcher looks for.

The reference document for this search is the Invention Disclosure document that the inventors have created.

The starting point of a risk analysis search is a list of specifications of the product that is proposed to be launched or developed for launch. It also has a good description of the technology that will be used to achieve those specifications. The search is oriented towards finding patents which not only describe the product or the technology but also claim it. As mentioned earlier, the claims define the boundaries of the protected invention.

Once the search yields patents meeting these requirements, the result set will be analysed for finding patents that are still in force and also only those that are in force in the country or countries in which the product is planned for launch.

As mentioned earlier, if such patents are found, they may be subjected to an invalidity search.

We treated these two searches separately only based on the result hoped for from them. However, there is no difference between them and will be described together here.

All this information is summarized in the table below. 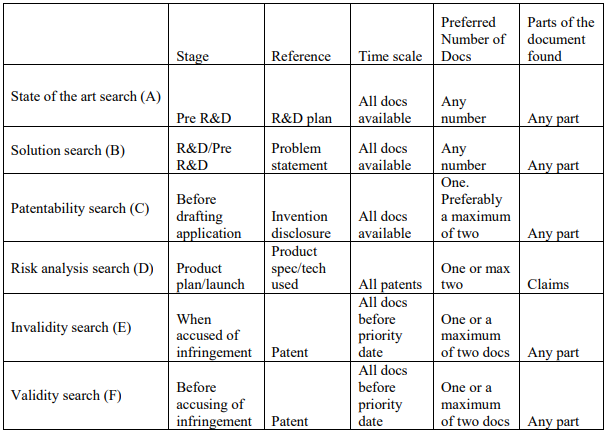 In the third and concluding article of the series which follows, let us look at how the searches are done and what tools a searcher has in the tool kit to conduct an effective search.