Factual summary of the case:

The present suit was filed by Mondelez India Foods Private Limited (Formerly Cadbury India Limited) in August 2005, seeking permanent and mandatory injunction and damages for infringement of trademark and copyright, passing off, unfair competition, amongst other reliefs. The plaintiff contended that it holds the trademark registrations for ‘CADBURY GEMS’ and ‘GEMS’ for class 30 products. The plaintiff also held copyright registrations for the artistic works featuring the character “GEMS BOND” that was used by the plaintiff for marketing and advertisement of its product.

The Plaintiff began its operations in 1947 and was the market leader in the field of confectionary chocolate products worldwide, including in India. Some of the leading brands of the Plaintiffs are Bourn Vita, Cadbury Dairy Milk, Cadbury 5-star, Cadbury Perk.  M/s. Neeraj Food Products, the defendant herein, under the mark ‘JAMES BOND’ launched a chocolate product with an identical colour scheme, layout, and arrangement which is identical to the Plaintiffs’ ‘CADBURY GEMS’/ ‘GEMS’ products. The comparison of the packaging of both Plaintiffs’ (on the left) and the Defendant are as below: 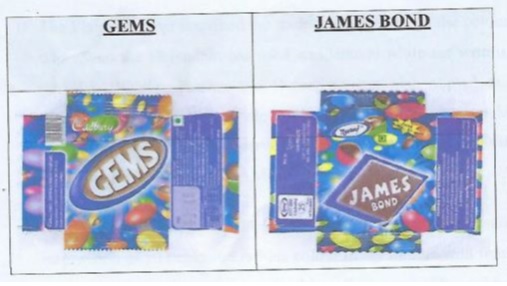 The Defendant’s packaging uses the terms ‘JAMES BOND’/ ‘JAMEY BOND’ with the same blue/purple base and colourful button chocolates. Further, in the Defendant’s product, the term JAMES BOND is written in the brown background, which is nearly identical to the Plaintiff’s products. The entire colour scheme of the Defendant’s product is identical to that of the label and packaging of the Plaintiff. The marks would be considered to be confusingly and deceptively similar, if one just simply gives a quick glance. The pillow-pack of the defendant is deceptively and confusingly similar to the pillow-packs of the Plaintiff’s products. 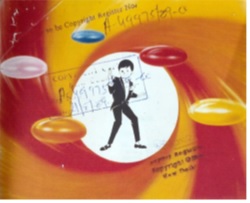 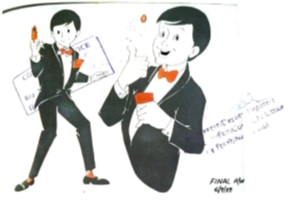 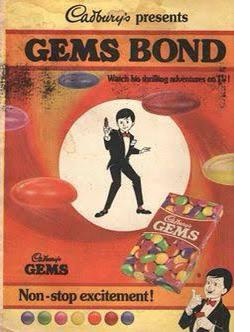 The Defendant filed a written statement at an early stage of the suit, the main argument of his defence was that the label and marks are not identical or deceptively similar. The Defendant had filed trademark application in 2002 under Class 30 in respect of goods being all kinds of food products, including confectionary, churan goli (small digestive balls made with exotic digestive spices, herbs and a variety of fruits) etc with an alleged user claim of the year 1979. However, no advertisement/ documents were filed by the Defendant in support of the user claim. Only few kacha/ informal/ flimsy invoices (sales receipts/ invoices issued by local vendors which usually have no records neither in accounts books nor are these revealed for tax purposes.) were attached as evidence which dated back to the year 2001-2002. Eventually, the Plaintiff also filed ex-parte evidence and supporting documents in support of its claims which were perused by the Court.

It is to be noted that the Defendant had been irregular in its appearances before the court, contributing to the delay of the matter. The Defendant had initially entered appearance, but later the Defendant stopped appearing and the matter was proceeded ex-parte. The case was first heard in 2005 and an interim injunction had been in force in the case since May 2007 in favour of the Plaintiffs.

Findings of the Court:

The Court was of the opinion that, the case is res ipsa loquitur and the Court further went on to point out the similar features between the rival products.

The use of the impugned mark ‘JAMES BOND’/ ‘JAMEY BOND’ and the product packaging bearing the impugned mark amounts to infringement of the Plaintiff’s registered trademark ‘CADBURY GEMS’/’GEMS’ along with its copyright registrations which features the character ‘GEMS BOND’ as shown above and also constitutes passing off. The Plaintiff started their business as early as 1947 and their earliest registration for the word mark ‘CADBURY’S MILK CHOCOLATE GEMS’ was 1968 in class 30. The Plaintiff’s GEMS product is one of the most popular and well-recognized products in India. Person of every age has seen and tasted CADBURY GEMS. If one hears the term ‘gems’, they will associate the products with the Plaintiff only.  The Court opined that the Defendant had infringed a well-known trademark, label and packaging which makes it a fit case for the award of damages as well.

In all the three cases, the main focus was on the fact that in deciding the question of similarity between the two marks we have to approach it from the point of view of a person of average intelligence and of imperfect recollection. It was also highlighted that where the product is an eatable like a biscuit, the colour and the colour scheme of the packaging plays an important role in the consumer making an initial choice and in enabling a discerning consumer to locate the particular brand of a manufacturer.

A comparison of the Defendant’s infringing product and its packaging leaves no iota of doubt that it is a complete knock-off of the Plaintiffs’ ‘CADBURY GEMS’ product and no one else. Further, the conceptualization of the Defendant’s JAMES BOND is similar to the plaintiff’s GEMS BOND. Also, products sold by the Plaintiff are not only in bigger packs, but also in smaller pillow packs. The smallest selling unit of the Plaintiffs’ product i.e., the pillow pack, is even available for 5 rupees. The product’s get up, layout, and also, the colour combination of the packaging plays a significant role at the point of purchase. Moreover, the Court also observed that the chocolates are available for purchase not merely in big retail stores or outlets, but also, in roadside shacks, street vendors, local neighbourhood general stores and stalls outside schools, offices etc. Thus, there is an immense likelihood of confusion, particularly considering the targeted consumers are children who consume the product in both rural as well as urban areas.  The products in question are chocolates/ confectionaries while the target market is children which increases the chances of confusion manifold.

Considering, the Plaintiff’s trademark is well-known, the Hon’ble Court was convinced that is a fit case for the award of damages and in view of this violation of the Plaintiffs’ rights, damages to the tune of Rs.10 lakhs and actual costs of Rs.15,86,928 were awarded in favour of the Plaintiff.

The judgement came after a long wait of 17 years which was full of twists and turns. Attempts were also made by both parties, along the course of the suit proceedings for an amicable settlement, which however did not go through. But in the end, looks like justice was served albeit a little late!

In this article published in the latest edition of the Global IP Matrix, authors Manisha Singh and Malyashree Sridharan discuss about the Delhi High Court’s ruling on a trademark battle, in the case of Mondelez India foods Pvt Ltd. & Anr. (Formerly Cadbury India Limited) versus Neeraj food products, a case which went on for over a decade!