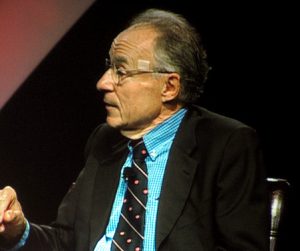 Scientists discover, publish, and get prizes – The Nobel prize being one of the most prestigious. Inventors invent and patent their inventions. This is the world of discovery and invention, in a nutshell. However, often, scientists also invent and obtain patents. Sometimes the patents might not have anything to do with the work for which they have received the Nobel prize. Let us now explore Physicist Arno Penzias and his patents in this fourth article of a series of articles on Nobel laureates and their patents.

Bell Labs had built a huge antenna in 1960. It was called Echo and was part of an early satellite transmission system. Even though this antenna would be useful for fundamental research, the commercial interest overrode the scientific need and hence was not available for pure research. However, when the satellite Telstar was launched, the antenna became redundant.

Two employees of Bell Labs had been eyeing this antenna for their research. They had both worked on masers (microwave amplification by stimulated emission of radiation) which are similar to lasers (which uses light) but use microwaves. When Echo became free, they jumped at the opportunity to use it for their research.

The two Bell Labs scientists were astronomers Arno Penzias and Robert Wilson. When they finally had access to Echo and wanted to start working with it, they found that the signals received and amplified by it had an inexplicable static noise that they could not eliminate. They even thought that the noise may be due to the pigeon droppings inside the huge antenna. So, they drove the pigeons out and cleaned the antenna but without any success. In a scientific paper they wrote about it and referred to it cryptically as removing an unwanted coating of insulating material from the antenna.

Edwin Hubble, who has been honoured with a space telescope named after him, observed that the distant galaxies were all moving away from us. This was a lethal blow to the concept of the universe that existed in cosmology of the time – the steady state universe. If all the galaxies are moving away from one another it could mean that they were all together a long time ago. A Belgian scientist, who was also a priest, Georges Lemaître, theorised that all the matter in the universe must have been at a single point at a distant past. This theory came to be known as the big bang because the universe must have exploded and spread outward from a single point. When Lemaître sent his calculations to Einstein, on whose work his theory rested, it is said that the normally courteous Einstein wrote back that Lemaîtres mathematics was great but, his physics was rotten. This was because Einstein was reluctant to give up the theory of the steady state universe.

All those theories about the big bang are fine, but the process of science demands proof. Calculations by Robert Dicke of Princeton University had revealed that, if the big bang did really happen, a microwave radiation must pervade the universe in all directions. This is known as the cosmic microwave background radiation sometimes referred to as CMB or CMBR.

When Penzias and Wilson were unable to eliminate the static, someone suggested that they talk to Dicke. That meeting resulted in the two announcing that they had discovered CMBR. This earned Penzias and Wilson the 1978 Nobel Prize in Physics, “for their discovery of cosmic microwave background radiation”. With this, the steady state model of the universe was finally laid to rest.

A search for patents with the inventor’s name Penzias returns at least twenty-seven patents and patent applications. The assignees are Lucent Technologies, AT&T Bell Labs or Cisco. Almost all the patents are connected with various aspects of communication technology. There are about half a dozen patents for which he is the applicant too.

As we can see, Penzias was not only a Nobel prize winning scientist but also a prolific inventor.

J L Anil Kumar, Senior Consultant, LexOrbis, discusses the life and work Arno Allan Penzias, an American physicist, radio astronomer and Nobel laureate in physics. Penzias shared one-half of the 1978 Nobel Prize for Physics with Robert Woodrow Wilson for their discovery of a faint electromagnetic radiation throughout the universe.