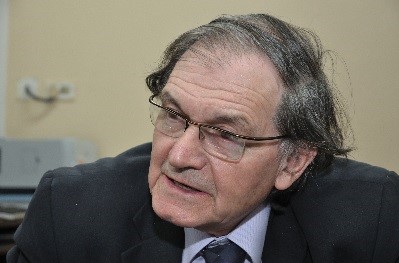 Scientists discover, publish, and get prizes – The Nobel Prize being one of the most prestigious. Inventors invent and patent their inventions. This is the world of discovery and invention, in a nutshell. However, often, scientists also invent and obtain patents. Sometimes the patents might not have anything to do with the work for which they have received the Nobel Prize. Let us now explore Roger Penrose, who was born in September, and his patent in this tenth article of a series of articles on Nobel laureates and their patents.

One of the predictions based on Einstein’stheory of relativity is the existence of black holes. However, Einstein himself did not like the idea which was a result of calculations he himself had made based on his own theories.

Roger Penrose a British mathematician, mathematical physicist, philosopher of science was awarded the Nobel prize in Physics in 2020 for his work showing that the “the discovery that black hole formation is a robust prediction of the general theory of relativity”. Some people have estimated that he is one of the smartest people alive and is one of the people with the highest estimated intelligence quotient, and so on. It is another matter that such estimates do not have a solid scientific basis. He is also considered to be a deep thinker about human (and artificial or machine) consciousness.

The Wikipedia entry on Penrose has two items under the heading “Interests”. Mathematical physics, tessellations. Tessellations are defined as the covering of a surface, often a plane, using one or more geometric shapes, called tiles, with no overlaps and no gaps. Penrose set about trying to design such tiles where the pattern generated by the tiles is non-repetitive. He first reduced the number of tiles required to create such tiling to six and then later to just two. He then went on to patent his invention.

The abstract of the patent gives a simple description of it: “A set of tiles for covering a surface is composed of two types of tile. Each type is basically quadrilateral in shape and the respective shapes are such that if a multiplicity of tiles are juxtaposed in a matching configuration, which may be prescribed by matching markings or shapings, the pattern which they form is necessarily nonrepetitive, giving a considerable esthetic appeal to the eye. The tiles of the invention may be used to form an instructive game or as a visually attractive floor or wall covering or the like.”

Once, when Penrose’s wife went shopping, she found rolls of tissue that had a geometric pattern on it. She recognised it as perhaps the tiling created by Roger Penrose. So, she bought a few rolls and showed it to him. She was right and it turned out to be the special type of tiling pattern that Roger had invented years ago. Apparently, toilet tissue embossed with such a non-repeating pattern has the advantage that the layers of the roll do not stick to one another, when rolled.

So, a company owned by Penrose sued the maker of the tissue rolls for copyright infringement because, by then, the patent itself had expired. The newspaper The Independent reports that Penrose “sought an injunction to stop the makers infringing his copyright, inquire into damages for infringement of copyright, or an account of profits, and an order for damages, with interest, and costs”. He also alleged that the pattern on the toilet tissue and on the packaging are reproductions of  his copyright works, and the producer of the tissue knew the pattern was infringing on his copyright works. You can read more about that here.

Mathematician, deep thinker on intelligence – artificial and natural – , cosmologist, estimated to be one of the most intelligent people in Britain, Nobel laureate, and, last but not the least, an inventor! That is Roger Penrose in a nutshell for you. Continuing his series on Nobel laureates and their patents, J L Anil Kumar, Senior Consultant, LexOrbis, explores the life and works of Penrose.