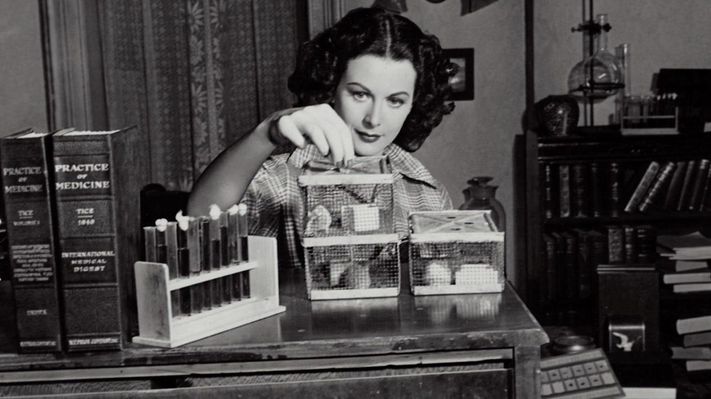 Pop quiz: What is common between one of the technologies behind GPS, Bluetooth, guided missiles, mobile phones on the one hand and Hollywood on the other? All the technologies mentioned use a technique called Frequency Hopping Spread Spectrum to prevent being jammed easily and eavesdropping. That technology was co-invented by a famous Hollywood actress of the 1930s and 40s – Hedy Lamarr.

Hedy was an Austrian and was married to an Austrian arms supplier. She had attended parties in which Nazi officers often discussed war related technologies that were being developed by Germany. Hedy Lamarr escaped from her marriage to her obsessive husband, went to America and became a much sought-after Hollywood actress.

She had heard that Germany used a wired technology to guide their torpedoes. She teamed up with another inventor, who was also a musician, to develop a radio guidance system for torpedoes. They realised that such a system could be jammed. So, they developed a system in which the communication continuously switched frequencies. And this can be achieved with both the controlling entity and the controlled entity knew the sequence of switching. However, the US armed forces never used this technology during the second world war. Years later, during the Cuban missile crisis, the US navy used this jam-proof technology for communication. This has now become a standard technique in many communication applications.

The technique can be described briefly as follows. Frequency hopping spread spectrum (FHSS) consists of transmitting radio signals by changing the carrier frequency among many specific frequencies at predefined, rapid intervals, occupying a large band of a spectrum. The changes are controlled by a code known to both the transmitter and receiver. FHSS is used to avoid interference, prevent eavesdropping, and enable code-division multiple access (CDMA) communication.

The available frequency band is divided into smaller sub-bands. Signals hop their carrier frequencies among the centre frequencies of these sub-bands in a predetermined order. Therefore, any interference at a specific frequency will only affect the signal during a short period of time.

Hedy Lamarr’s maiden name was Hedwig Eva Maria Kiesler. She was born in Vienna. Her father was Emil Kiesler a successful bank manager. Her mother was Gertrud Kiesler (née Lichtwitz), a pianist. Hedy emigrated to the US in 1938 but was stateless until 1953 when she acquired US citizenship. She had set up a place in her house to do inventions. It is said that she could be a famous actress and still do inventions because she did not drink or smoke and did not like parties.

Hollywood gave her the title of “The Most Beautiful Woman in the World”. Some believe that this made it difficult for her to be taken seriously as an inventor. Many have opined that many of her inventive ideas were trivial. For example, a tissue holder with its own pocket to dispose used tissue.

She was awarded the Electronic Frontier Foundation Award in 1998, more than 50 years after she and her co-inventor, Antheil George, received their patent. It is said that this award gave her much satisfaction.

She continued inventing late into her life. She was also a film director and dabbled in painting after she retired from films in 1958.