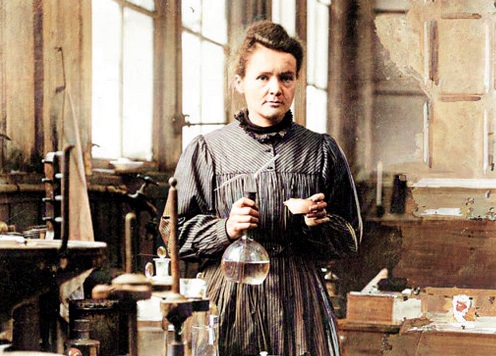 Imagine someone inventing a process that would create a new industry but decides not to patent the process. The process is estimated to have been worth a few billion US$ in today’s money. The reason for the decision? The research work was funded by public money and hence must be available freely to the public and because patenting the process would hinder other scientists doing research in the field! We are talking about Marie Curie.

Not only that, she and her husband, Pierre Curie, initially refused to travel to Stockholm to receive the Nobel prize because they were too busy with their research. And Marie Curie herself was awarded the Nobel prize once for Chemistry and once for Physics – the only person to have been awarded the Nobel Prize in two different scientific disciplines. (Linus Pauling won the Nobel Prize for Chemistry and later for Peace – for his anti-nuclear arms efforts) She was also the first woman professor in the University of Paris and the first woman Nobel laureate.

Marie Skłodowska Curie, born Maria Salomea Skłodowska was a Polish-French scientist. She was born in Warsaw, which was in the then Kingdom of Poland and part of the Russian Empire. She studied at Warsaw University and had her practical scientific training in Warsaw. At the age of 24, she went to study in Paris, where she earned her higher degrees and conducted further scientific work.

In 1893, she was awarded a degree in physics. She began work in an industrial laboratory. She continued studying at the University of Paris, aided by a fellowship, was able to earn a second degree in 1894. She began her scientific career with an investigation of the magnetic properties of various steels. This study was commissioned by the Society for the Encouragement of National Industry. She was introduced to Pierre Curie by another Polish scientist as she wanted larger laboratory space for her work and Pierre Curie could provide it. This and their interest in the natural sciences culminated in their being married in 1895.

In 1895, Roentgen discovered X-rays. The mechanism behind their production was not yet understood. In 1896, Becquerel discovered that uranium salts emitted rays that resembled X-rays. Marie Curie using an innovative technique discovered that the rays from uranium caused the air around the sample to conduct electricity – ionising radiation. Using this technique, she found that that the activity depended only on the quantity of uranium present. She put forward the hypothesis that the radiation came from the uranium atom itself.

Between 1898 and 1902, the Curies published, either jointly or individually, a total of thirty-two scientific papers. They included one that announced that diseased, tumour-forming cells were destroyed faster than healthy cells, when exposed to radium.

The1903, Nobel Prize in Physics was shared between her, her husband Pierre Curie and physicist Henri Becquerel, for their theory of radioactivity – a term she coined. Using techniques that she invented for isolating radioactive isotopes, she discovered the elements, polonium and radium and won the 1911 Nobel Prize in Chemistry.

In 1906, Pierre Curie was killed in a traffic accident and Marie was devastated. A professorship had been created recently for Pierre and it was offered to Marie herself.

Marie Curie died in 1934 from Aplastic anaemia presumably caused by exposure to radiation. She dedicated the final years of her life to developing radiation treatments for cancer using radium, in the Radium Institute, which was later renamed Curie Institute.

The article was first published in Lexology on June 3rd, 2021