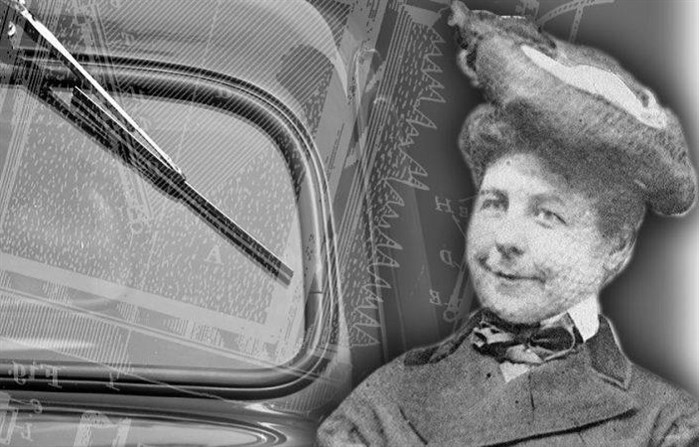 An internet search for wipers for glasses yields many results. If you wear glasses and go out on a rainy day you might wish that your glasses had wipers like car windshield wipers. Wipers have become so common. Once, rear windshield wipers were a novelty but are becoming commonplace. In India, till recently autorickshaws (three wheeled scooter rickshaws) had manually operated windshield wipers, operated by the drivers using a lever.

Can you imagine that car windshield wiper was invented before Henry Ford started mass producing cars and personal transportation became popular? Further, the device was invented by an individual not connected with the vehicle industry. Mary Anderson was on a visit to New York City and was travelling by a trolly car (tram) on a frosty day. She found that the windshield was getting frosted frequently. The driver had to open a window and lean out to clean the window or stop the car, go out and clean the window.

Mary was not an engineer or an inventor. She was in fact a real estate developer, owned a ranch, and was a viticulturist (grape farmer). She was more of a business-woman than an inventor. She saw a business opportunity in solving this problem she observed. Even though many had seen the driver doing the cleaning neither the drivers nor others had seen it as a problem and hence no one had thought of solving it.

She hired a designer for a hand-operated device for keeping windshields clear. She even got a local company to produce a working model. She then applied for a patent – in 1903 and got it granted the same year. The patent term was seventeen years then.

The wiper consisted of a lever inside the vehicle that could control a rubber blade on the outside of the vehicle located on the windshield. Operating the lever could cause the spring-loaded arm to move back and forth across the windshield. A counterweight was used to ensure contact between the wiper and the glass. Interestingly, the device could be removed, if desired – when winter was over. The simple mechanism and the basic design of the wiper have remained more or less the same till today. Whereas Anderson’s wipers could be removed when not needed modern windscreen wipers are permanent fixtures.

Even though she tried to get companies interested in her invention, they did not feel that there was a need for such a device and warrant expenses. However, by the time her patent expired (in 1920) personal transportation was seeing explosive growth. Soon her invention became standard features of automobiles. Thus, she made no money from such an important invention.

Interestingly, in 1917, another woman inventor, Charlotte Bridgwood, invented and patented an electrically operated “electric storm windshield cleaner” an automatic wiper system that used rollers instead of blades. Like Anderson, Bridgwood also never made any money from her invention.

Mary Anderson was born in Greene County, Alabama, at the start of reconstruction of America after the civil war, in 1866. Her parents were John C. Anderson and Rebecca Anderson. Mary had a sister, Fannie, who remained close to Mary all her life. Their father died in 1870, and the family was able to live on the proceeds of John’s estate. Nothing is known about Mary’s education. She never married and remained with her mother and sister in Alabama till the end of her life.

Windshield wipers  are so ubiquitous that we may never think that they had to be invented. However, a woman, Mary Elizabeth Anderson, invented it. Like many inventions far ahead of their times, she made little money from her invention. @J L Anil Kumar, Senior consultant, LexOrbis, traces the history of the invention of the windshield  wiper.