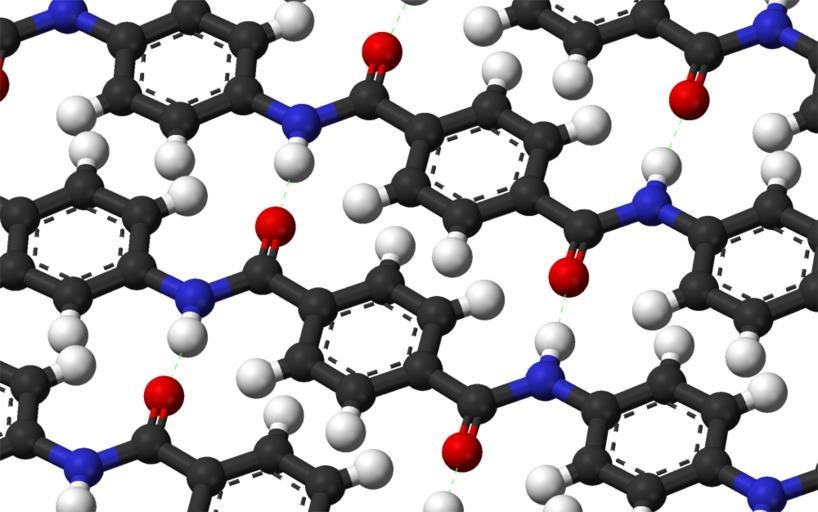 For most people, the name poly-paraphenylene terephthalamide would be intimidating. The name Kevlar is, however, well known to many as a fibre of exceptional strength used in making bullet proof vests, among other things.

This fibre was invented by Stephanie Louise Kwolek, a polymer chemist working at DuPont. Kwolek was born to Polish immigrant parents in New Kensington, a suburb of Pittsburgh, Pennsylvania. Her father was interested in nature and was an amateur naturalist. Stephanie spent a lot of time with him outdoors in nature. Even though her father died when she was just ten, she attributed her interest in science to his influence.

Stephanie earned a Bachelor of Science degree, in 1946, with a major in chemistry, from Margaret Morrison Carnegie College of Carnegie Mellon University.

She wanted to study medicine and wanted to work for a while to earn some money for her education. She got a job as a chemist in DuPont and found the work interesting enough to continue there. It is interesting to note that she got the job in DuPont mainly because many men were away fighting in World War II and there were not enough qualified men to fill the post.

While at DuPont, she won an award from the American Chemical Society (ACS), for her paper titled the “Nylon Rope Trick”, that demonstrated a way of producing nylon in a laboratory at room temperature. It was a first of many awards in her career.

She and a colleague got a patent, her first, for a method of producing PBO and PBT polymers (polybenzobisoxazoles and polybenzobisthiazoles respectively)

In the 1960s, a petrol shortage was envisaged. So, in related research, her group began searching for a strong but lightweight fibre to replace the steel used in tires. The material her team was working with then, formed liquid crystals while in solution. To make fibres out of them they had to be melt-spun at a high temperature (around 200 °C) which produced weak and less stiff fibres. An aim of her project was to reduce those temperatures to between 0 and 40 °C.

She explained this in a speech somewhat as follows: “The solution was of unusually low viscosity, turbid, stir-opalescent and buttermilk in appearance. Conventional polymer solutions are usually clear or translucent and have the viscosity of molasses. The solution that I prepared looked like a dispersion but was totally filterable through a fine pore filter. This was a liquid crystalline solution, but I did not know it at the time.”

This kind of solution was usually thrown away. However, Kwolek persuaded a technician to test her solution. She was amazed to find that the new fibredid not break at stresses at which nylon typically would. Not only was the new fibrejust stronger than nylon but also was five times stronger than steel by weight! This is what is called a serendipitous invention – an invention by accident.

This is what we now know as Kevlar that is used in bullet proof vests. By 1971, improved versions of Kevlar were introduced. Kwolek learned that the fibres could be made even stronger by heat-treating them. The polymer molecules, shaped like rods or matchsticks, are highly oriented, which gives Kevlar its extraordinary strength.

This high-strength material, Kevlar, was first used commercially as a replacement for steel in racing tyres. Kevlar has many applications, ranging from bicycle tyres to racing sails apart from making bullet proof vests.

She was awarded the DuPont’s Lavoisier Medal for outstanding technical achievement.

In 1995 she became the fourth woman to be added to the National Inventors Hall of Fame in United States.