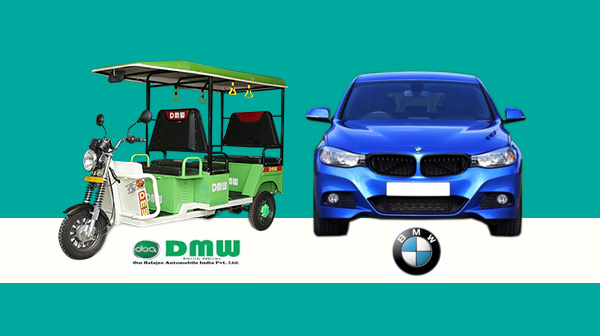 In cases of dilution of well-known trademarks, the question of deceptive similarity or element of deception may not be a necessary consideration. Dilution of a registered trademark arises when the use by the defendant is likely to be detrimental to the reputation and distinctive character of that mark. If such infringing mark is allowed to be used on products, which do not originate from the true owner, the same may diminish the ability of that mark to identify the source of the goods, besides lowering its reputation in case their quality is not of expected standard.

The Delhi High Court in March 2020 in Bayerische Motoren Werke AG v. Om Balajee Automobile (India) Private Limited, deciding on an application for ad-interim injunction, restrained the latter (defendant) from using the mark ‘DMW” for E-Rickshaws, etc. It all started when the plaintiff in July 2016 became aware of the defendant’s E-Rickshaws with the trademark DMW plying on the road and as a result sent a cease and desist notice to the defendant to refrain from using this mark. However, the defendant refused to comply. Feeling aggrieved, the plaintiff filed the present suit in 2017.

In the suit, the plaintiff pleaded that its mark BMW is “well-known” and as a German automobile manufacturing company, founded in 1916, it manufactures and sells automobiles under the “BMW” marks, which stands as an abbreviation of its corporate name “Bayerische Motoren Werke”. It stated that it is popularly referred to as “BMW” and has been manufacturing motorcycles since 1923 and motor cars since 1928 under the mark. It has assembly plants in 14 countries and a global sales network in more than 140 countries. In 2016, it had a revenue of 94.163 million Euros and sold 23,67,600 vehicles worldwide of which two million vehicles were cars with the brand BMW. The plaintiff also asserted its registrations for the trademark BMW dating back to 1956 and its commercial use since 1987, with respect to India.

The plaintiff pleaded that the defendant was found to be using a deceptively similar mark DMW for E-Rickshaws, Electric Cargos and Loaders. Both marks had three letters wherein the last two letters ‘M’ and ‘W’ were identical and the first letter ‘B’ had been merely replaced by the letter ‘D’. It was also argued that the letters ‘B’ and ‘D’ are visually and phonetically similar on account of which the mark DMW is phonetically similar to BMW. It was further pleaded that the defendant had committed an act of passing off since E-Rickshaws were somewhat similar to automobiles as covered by the mark BMW and that defendant’s adoption of the mark DMW was mala fide.

The defendant questioned the maintainability of the suit relying on the differences between the two sets of goods, their corresponding nature and class of purchasers and argued that the suit was barred by limitation, delay and laches. It also pleaded that the marks are not deceptively similar and that DMW stands for “DESHWAR Motor Works” for which it had filed an application to register the mark “DMW DESHWAR MOTOR WORKS”. The defendant also argued on the difference in the market price of the products of the respective parties i.e. Rs. 50,000 as opposed to a minimum of Rs. 35,00,000.

The court observed that the defendant had adopted the essential features of the plaintiff’s mark and the visual and phonetic resemblance was clear. On account of this the defendant’s mark DMW was likely to deceive and cause confusion. While dealing with this aspect of deceptive similarity, the court relied on the observations made in the landmark Supreme Court cases of Corn Products Refining Company v. Shangrila Food Products Limited‘, ‘AmritDhara Pharmacy v Satya Deo, ‘Durga Dutt v Navaratna Laboratories’.

On the issue of difference in the products of the plaintiff and the defendant, the latter placed reliance on the Supreme Court’s judgement in Nandhini Deluxe v. Karnataka Cooperative Milk Producers Federation Ltd., (2018) 9 SCC 183 to plead that no confusion was caused by the use of its mark DMW. However, from the observations made in that case, the court noted that where the products were different, the prior owner’s chance of success is a function of many variables, which included the strength of his mark, the degree of similarity between the two marks, the proximity of the products, the likelihood that the prior owner would bridge the gap, actual confusion, aspect of good faith behind defendant’s adoption of the mark etc. and the court may still have to consider other variables. The court noted that the facts in that case were materially different whereas in the present case the strength of the plaintiff’s mark cannot be disputed and thus, the defendant’s use of the mark DMW was prima facie dishonest. There was an intention to take advantage of the reputation and goodwill of the plaintiff’s brand, which was likely to mislead an average man of ordinary intelligence.

While dealing with the issue of dilution of the plaintiff’s mark, the court analysed the reliance placed by the plaintiff on the judgements in ITC Limited v. Philip Morris Products SA and Ors, ILR (2010) 2 DELHI 455 and Tata Sons Ltd. v. Manoj Dodia and Ors., 2011 SCC Online Del 1520. The principle of dilution is encapsulated in Section 29(4) of the Trade Marks Act, 1999 and the court agreed with the observations made in the above referred cases that the test for dilution is not the same as that of deceptive similarity. It was noted that the “deceptively similar” standard was not legislatively included in relation to infringement claims under Section 29(4) and the question of deception would not arise while claiming dilution of the mark. The court further noted that in the case of well-known trademarks such as the present one (BMW), the defendant’s use of a visually and phonetically similar mark on its products would constitute infringement under Section 29(4) as such use is detrimental to the reputation of the plaintiff’s registered mark.

Further, on the ground of limitation, delay and laches as raised by the defendant, the court held that these contentions were erroneous and unfounded. It was noted that the plaintiff acted swiftly in July 2016 itself once it came to know about the defendant’s infringing use of the mark DMW; by sending a cease and desist notice and thereafter filing the suit in 2017. The court, referring to the case of Midas Hygiene Industries (P) Ltd. v. Sudhir Bhatia and Others (2004) 3 SCC 90 made it clear that even if there was delay on the part of the plaintiff in filing the suit, the same would not be sufficient to deter grant of injunction in favour of the plaintiff; given that the defendant’s adoption of the mark was also prima facie dishonest. It was held by the court that the plaintiff has made out a prima facie case and the balance of convenience is also in its favour.

This judgement gives due importance to the protection of well-known and reputed trademarks from the menace of dilution as a form of infringement; and reinforces the concept that the test for dilution is not the same as deceptive similarity.