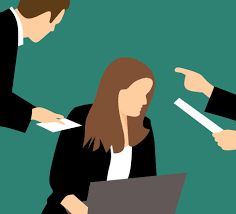 “You took away my worth, my privacy, my energy, my time, my safety, my intimacy, my confidence, my own voice, until today”1

While sexism and discrimination are as old as the human race, the very term “sexual harassment” was coined in the mid-70s by Lin Farley, justifying that the practice of sexual harassment against women is centuries old. Surviving accounts of women in manufacturing and clerical positions in the late nineteenth and early twentieth centuries also point to a variety of contexts in which men imposed sexual relations on women who worked for or with them, ranging from assault to all sorts of unwanted physical or verbal advances. The issue of sexual harassment has always been overlooked in India, even during the period of the “MeToo” movement where survivors shared their stories and led to the downfall of numerous public figures worldwide, in politics, business, professional, the entertainment industry, and beyond. Even after that the practice still remains a depressingly common phenomenon worldwide. Often the incidents of sexual harassment can have life-altering effects, particularly when they involve severe/chronic abuses, and/or retaliation against a victim who does not submit to the harassment, or who stands up to it complaining about it openly.

Sexual harassment at workplace is outright unacceptable criminal. No women should be subjected to sexual harassment at any workplace.2 It is a violation of women’s right to equality, life and liberty. It creates an insecure and hostile work environment which discourages women’s participation in work, thereby adversely affecting their social and economic empowerment and the goal of inclusive growth.

Impacts of sexual harassment are felt beyond just the harassing interaction. There is no sector that remains untouched by sexual harassment, nor unaffected by its impacts. Sexual harassment damages the lives, health, prospects, financial independence and opportunities of the victims. It is a huge issue in society which needs to be given more attention.

Across the globe today, workplace sexual harassment is increasingly understood as a violation of women’s rights and a form of violence against women. While the official figures for women’s work participation are low, much of the work that women do is not captured in official data accounts. It is argued that where this is to be captured, women’s overall work participation would be 86.2 per cent. While the official data shows that women’s work participation rate is around 25.3 per cent in rural areas and 14.7 per cent in the urban areas, estimates indicate that there is a huge workforce of women, therefore there is a need to secure their workplace and entitlements. Given, that 93 per cent of women workers are employed in the informal sector, they remain unprotected by laws. With no laws or mechanisms to protect them, proactive measures are required to make their workplaces safe.3

The Convention on the Elimination of all forms of Discrimination against Women (CEDAW) is an international treaty on women’s rights to which India is a party. This alongwith landmark decision of the Supreme Court protecting women’s rights at workplace happened to be the basis for the SHAW Act, 2013. The convention defines discrimination against women as “.any distinction, exclusion or restriction made on the basis of sex which has the effect or purpose of impairing or nullifying the recognition, enjoyment or exercise by women, irrespective of their marital status, on a basis of equality of men and women, of human rights and fundamental freedoms in the political, economic, social, cultural, civil or any other field.”4 CEDAW, for the first time in the sphere of International Law, accorded primacy and supremacy to women’s human rights. India is a signatory to CEDAW.5

India took 50 years to come up with a definition for what constitutes sexual harassment in the workplace, courtesy of a Supreme Court judgment 23 years ago Vishaka Vs. State of Rajasthan.6 The act uses the definition of sexual harassment as laid down in Vishaka case. This Judgment had come to be passed in the aftermath of a gang rape of a social worker (in Rajasthan) who had opposed certain discriminatory practices. The focus of the case shifted from a criminal wrong to a systematic gender discrimination which needed eradication.

Without any law around then giving measures to check the abhorrence of inappropriate behavior faced by women, the Supreme Court, in exercise of intensity accessible under Article 32 of the Constitution, encircled rules to be followed at all work environments or foundations, until an enactment is established for the reason. The Supreme Court incorporated basic principles of human rights enshrined in Constitution of India, which has been ratified in 1993 by the Government of India. Further the guidelines laid down by the Supreme Court were to be treated as the law declared under Article 141 of the Constitution. Nevertheless, the deciding factors were laid down as Vishaka guidelines which are as follows:

2. A demand or request for sexual favours

5. Any unwelcome physical, verbal or non-verbal conduct of sexual nature.

The Vishaka case was a path breaking judgment delivered with the objective of creating an enabling and safe environment at the workplace for the rapidly increasing female workforce.7

Those days are long gone when only men used to be the sole bread-winners of the family. Globalization has brought a radical change in the status of women worldwide. However, India still has a way to go on various gender equality measures. Sexual harassment at workplace has been traditionally divided into two well-know forms:

– Implied or explicit promise of preferential/detrimental treatment in employment

– Implied or express threat about her present or future employment status

– Creating a hostile, intimidating or an offensive work environment

– Humiliating treatment likely to affect her health or safety.

Sexual harassment has become a universal issue which has only increased with time and with so many stringent laws and heavy restrictions, still a large number of cases are yet reported. sexual harassment is not limited to just person to person physically but it has also expanded its range through online platforms as well. The ever-increasing use of the internet in the past twenty five to thirty years has served as a medium for sexual harassment that has, until recently, gone relatively unnoticed. While the internet has provided an array of benefits and advantages for today’s society, its darker side has substantially emerged as internet users are being subjected to online discrimination, harassment, identity theft, cyber stalking and cyber bullying on a daily basis.

Sexual harassment issues in the last couple of years have rapidly increased and covered in the Indian media. Every woman must feel safe at the workplace and in order to make her feel safe and secure, it is high time that employers take affirmative steps in implementing zero-tolerance policies at their workplaces towards sexual harassment and ensure that the complaint is investigated swiftly and confidentially.

It is certain that many victims shy away from the publicity, the procedures, the delay and the harshness in the criminal justice system, this alternative structure and process is welcome, but needs much alteration. Helping the victims to make informed choices about the different resolution avenues, providing trained conciliators, settlement options by way of monetary compensation, an inquisitorial approach by the Committee, naming the victim by use of words like complainant etc. and not using her actual name and in-camera trials are some areas of improvement.

4. Article 1 of Convention on the elimination of all forms of discrimination against women