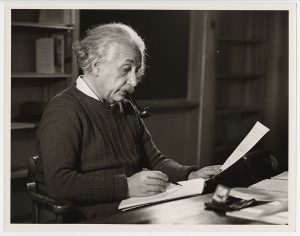 Scientists discover, publish, and get prizes – The Nobel Prize being one of the most prestigious. Inventors invent and patent their inventions. This is the world of discovery and invention, in a nutshell. However, often, scientists also invent and obtain patents. Sometimes the patents might not have anything to do with the work for which they have received the Nobel prize. Let us now explore Albert Einstein and his patents in this third article of a series of articles on Nobel laureates and their patents.

The year 1905 is referred to as annus mirablis– the miraculous year, in Latin, – in the history of science. This was the year in which Albert Einstein, then a physicist unknown to the physics community, published four ground-breaking papers. What makes it more astonishing is that he had worked alone, with no contact with other physicists at all. Einstein once said that until he became well-known and started meeting other theoretical physicists, he had never seen a theoretical physicist. “Why? Had you never looked into a mirror?” he was asked by his long-time associate Leopold Infeld. Einstein later became one of the most recognised faces in the world – a rare feat for a scientist.

The papers that he published in 1905 were on the subjects of Brownian motion, the special theory of relativity, mass-energy equivalence (E=mc2 ), and photoelectricity. With these papers he became one of the founders of the theory of relativity and quantum mechanics. When he published these papers, he was a clerk in the Swiss Patent Office at Berne and had done all this work in his spare time and during office hours too – by his own admission. He had learned to finish his work as quickly as possible and used the remaining office hours to work on the innumerable calculations that needed to be done to establish his theories.

Einstein, however, has a few patents to his credit. The most notable of them is the Einstein refrigerator which is also called Einstein-Szilard refrigerator. The Hungarian-American scientist and inventor, Leo Szilard was a former student of Einstein. He assisted Einstein in developing the refrigerator. They patented it in 1930 taking priority from a German patent application in 1926.

The uniqueness of this refrigerator is that it has no moving parts, operates at constant pressure, and only needs a heat source. This was never manufactured commercially. It is currently assigned to the Electrolux Company. However, there was some renewed interest in this refrigerator due to concerns about chlorofluorocarbons (CFCs) depleting the ozone layer and also global heating.

Leo Szilard himself was a prolific scientist and inventor. He never published his works in scientific journals. Thus, he may have missed wider recognition, including the Nobel prize which he could have been awarded for his work with cyclotrons and the electron microscope. It is also interesting to note that it was Szilard who persuaded Einstein to write a letter to the then president of United States, Franklin Roosevelt urging him that the US must develop the atom bomb before Nazi Germany could.

J L Anil Kumar, Senior Consultant, LexOrbis, discusses the life and work of the most influential scientist of the 20th century, Albert Einstein. Winner of the Nobel Prize for Physics in the year 1921, Einstein also has a few notable patents to his credit. Read all about it in the next article in the series on Nobel laureates and their patents here: https://www.lexology.com/library/detail.aspx?g=64fe2e0e-a993-4b3d-80a4-d5202e0a2de9