India is emerging as one of the dominant players in the modern world’s economics. One of the reasons is the continuous reforms in the Intellectual Property (IP) system. The continuous efforts by the Government of India in the form of IP awareness programs, reforms and growth have finally started showing its effect in practical sense. The endeavour has been towards the establishment of productive IP based system at all three levels i.e. statutory, administrative and judiciary portraying India as an IP friendly nation in global scenario. For the last few years there has been an increased realisation by the Indian system to provide for an improved IP ecosystem of International Standards. Keeping track of that, India has performed well in 2016 and provided comparatively better results from the previous year. In the Global Innovative Index, India has climbed up by 15 spots and maintains its top spot in the Central and South Asia.

The Government of India introduced new IP policy in the month of May, 2016. It is first ever attempt to cover all forms of IP in single framework. As per the policy, Department of Industrial Policy & Promotion (DIPP) will be working as a nodal department to “coordinate, guide and oversee the implementation and also look after the future development of IPRs in India.” The objective clause of the policy provides for “strong and effective IPR laws”, “modernize and strengthen service-oriented IPR administration” and also “strengthen the enforcement and adjudicatory mechanisms” with the “human Capital Development”. In the same month, Patents (Amendment) Rules, 2016 were also notified with new and more adequate procedural features of withdrawal and expedited examination of patent applications etc. for the soul purpose of streamlining the disposal rate of applications.

Before the introduction of the new IP policy, earlier this year DIPP updated the application numbering system for patents in course of adopting International practice standard which brought uniformity in accessibility and more efficient electronic processing of patent applications. The respective department had also notified the recruitment of 458 patent examiners and 100 odd examiners for trademarks. Additionally 263 examiners will also be appointed on contract basis. Before the recruitment drive there were only 130 patent examiners taking the burden of examining more than 40 thousand applications per year that resulted in huge backlog. It has been claimed that 396 patent examiners out of 458 have joined the work after training and this shall reduce the average time taken for granting the patents from 5-7 years to 18 months by March 2018 and to bring down the time limit for registering trademarks from 13 months to 1 month by March 2017.

In addition to these IP reforms, the updated website of Controller General of Patents, Designs and Trade Marks (CGPDTM), facility of e-filing, dispatching of examination reports via email, allowing hearing through video-conferencing etc. are phenomenal developments which should be applauded. These steps towards the digitalisation and technological development are expected to bring more transparency in the working of the IP offices.

In a meeting with IP stake holders, held on 14th of December, 2016, the CGPDTM has shed light on the improvement by the IP offices and its impact on the processing of applications portraying the current trends of processing Patents and Trade Mark applications by comparing the data of years 2015 and 2016 (April – November). 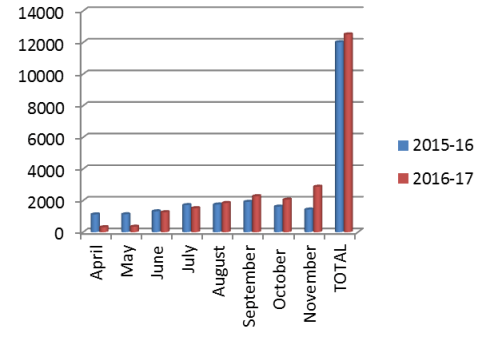 According to the presentation the total number of applications examined by the Patent offices has gone up by 4.13% from the last year.  If we see the comparative performance, we can say that they have shown slight improvement while examining the patent applications. 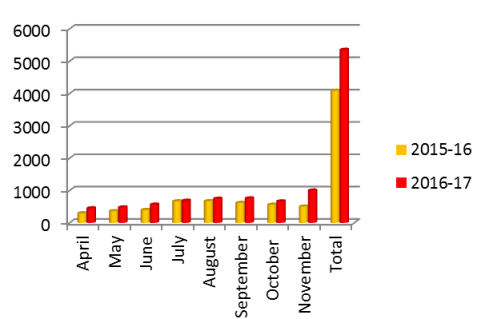 The trends of Patent offices while granting Patents have also shown positive development. There is a considerable hike in number of patents granted. The grants from the Patent offices have gone up by 31% as compared to last year for the reported time period. 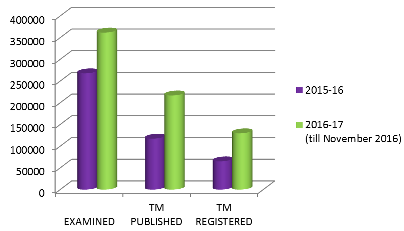 There is a substantive increase in processing of Patent applications too. The initiatives of the government have not only shown enormous results in examinations and grants but also in overall processing of applications. The Patent offices have cleared the pendency of statutory publication till 31st of August, 2016 by publishing special E-journals in the month of August and September, 2016.

The initiatives of Indian Government through the IP reforms have given a new hope to the IP stakeholders in India. The massive increase in the rate of disposing Patents and Trade Marks applications by the authorities shows their seriousness towards the particular issue. The major development brought by the government whether being structural development in the form of appointment of examiners or policy reforms in the forms of updating IP legislations have started showing recommendable results.

In contribution with all these steps, the development in the infrastructural facilities and digitisation of the IP records is also playing an important role in the mission of Intellectual Property Rights development. The government is continuously promoting the electronic filing of the IP applications which is helping in faster processing of the applications by the respective offices. The digitization and electronic databases maintained by the government agencies is helping the IP department to provide quality services to the stake holders and free excess to IP data, serving the purpose of transparency as well as efficient public search.

In spite of all these progressive steps and accelerated processing of the IP applications in past few months, it will be very challenging for the authorities to achieve the aim set by them, which is to bring down the effective duration for grant of patent to 18 months and registration of Trade Marks to 1 month in alleged time period. But with the present reformist strategies, the brighter future of the Intellectual property in India cannot be denied. In the coming time, it is expected from the Indian IP Office to perform more effectively and promptly.