Burdened with a huge back log and long pendency in processing of trademark applications and oppositions, the Indian Trade Marks Office (ITMO) has initiated several measures in the past couple of years. According to a report, over 544,171 trademark applications were pending for registration as on February 1, 2016. While commenting on achieving the targets of the National IPR Policy early the Finance Minister said that the government is putting in place a mechanism to drastically bring down the time period for registration of a trademark to one month by 2017.

With this announcement several steps were initiated and the highlight was complete digitization and providing online access to voluminous records at the ITMO. This measure has not only enhanced the transparency but also opened many opportunities such as free public search of marks, tracking the status of applications, downloading office actions and electronic filing of office action replies, advance notice of hearings, weekly publication of trademark journal, tracking oppositions filed by third parties, downloading notices of opposition, receiving registrations certificates over email, etc.

Another important step taken by the Government was hiring of new and trained examiners that allowed swift examination of trademark applications and processing of oppositions. A trademark application filed today receives first and mostly last office action within a month. As per a recent release, during April to August 2016 alone, the ITMO has examined more than 211,000 applications, published 137,861 marks and issued 50,304 Registration Certificates.

Some of the other recent initiatives include: 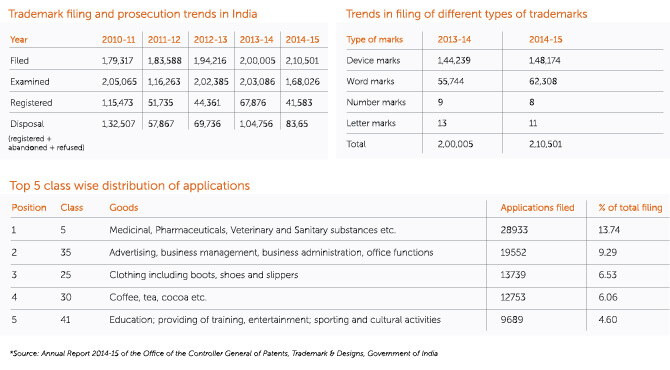