The transformation of the Indian IP Office in the last year has been unprecedented. It will not be a hyperbole to state that the need for simplified and streamlined processes has finally metamorphosed into concrete actions being undertaken by the Office of the Controller General of Patents, Designs and Trademarks (CGPDTM).

The previous year also beholds important policy as well as legislative changes, which demonstrate that the Indian Government too realizes the significance of a well-balanced IP regime that not only plays a noteworthy role in economic and industrial growth of the country but also promotes social welfare through stimulation of innovation, research and creativity.

The Office of the CGPDTM has released its Annual Report, wherein the initiatives executed by various offices under the CGPDTM, during the year 2015-16, have been analyzed and assessed. The Report shares these endeavors, and statistically scrutinizes the resultant developments. We bring to you year-wise data of filings, prosecution and registrations relating to trade marks and designs for the past years, collated from the Annual Report, information/data shared by Ministry of Commerce and Industry at Lok Sabha (House of People) and released on Press Information Bureau’s website. 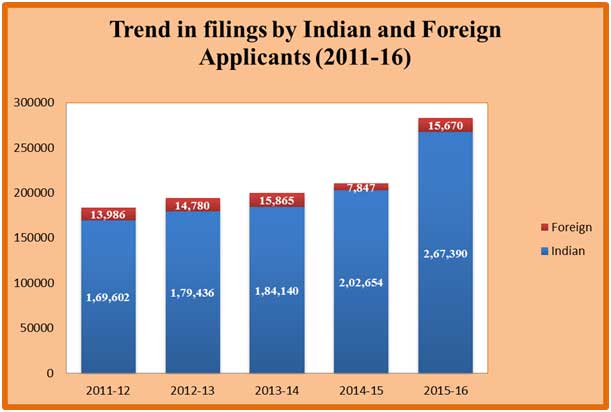 Acceptance rate of applications has increased by approximately 40% in the year 2015-2016.

Top 10 foreign countries in the realm of Design filings

Several initiatives to expedite the trade mark and design registration processes have been introduced. These new practices coupled with modifications in the subsisting procedures, brought about to address the monumental backlog, have been welcomed by one and all. Further, actions have also been taken by the Legislature to accelerate and streamline the trade mark registration process.

Some of the major initiatives are:

The much welcomed initiatives and steps to accelerate the registration process has resulted in a marked increase in the effective disposal of pending matters. Now with the enforcement of the long awaited new Rules, it is expected that further robust and positive changes will be brought about, which will encourage one and all to seek protection for their IP.