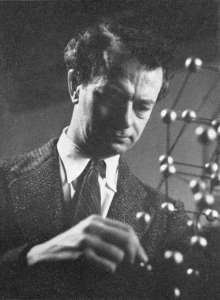 Scientists discover, publish, and get prizes – The Nobel prize being one of the most prestigious. Inventors invent and patent their inventions. This is the world of discovery and invention, in a nutshell. However, often, scientists also invent and obtain patents. Sometimes the patents might not have anything to do with the work for which they have received the Nobel prize. Let us now explore Linus Pauling and his patents in this second article of the series on Nobel laureates and their patents.

It is evening in Washington. The banquet hall of 1600 Pennsylvania Avenue, better known as The White House – the residence and offices of the president of the United States – is abuzz with activity. Preparations are afoot for the annual gala dinner hosted by the president to all the Nobel laureates of the country. It is scheduled for seven that evening.

Outside, there are protestors protesting because the United States continues to test nuclear weapons whereas the nuclear arsenal already in existence worldwide is enough to destroy the world many times over. There are some who defend the tests. They argue that they are necessary because of the cold war between the western nations and the Soviet Union and its allies.

One of the protestors who is in shirt sleeves, has a small suitcase in one hand and a placard in the other. He is shouting slogans along with all the other protestors. A little before seven, he hands over his placard to someone near him. Takes out a coat and a tie from his suitcase, wears them, and walks into the gates of the White House to take part in the dinner. The name on the invitation he shows to the security guards at the gate says he is Linus C. Pauling.

Linus Pauling is no ordinary Nobel laureate. He received two full – not shared with anyone – Nobel prizes to his credit. One for Chemistry and one for Peace. His Nobel prize citations read, “for his research into the nature of the chemical bond and its application to the elucidation of the structure of complex substances” and “for his fight against the nuclear arms race between East and West.”

It is generally acknowledged that Pauling had an extraordinary mind. James Watson, the co-discoverer of the double helix structure of DNA writes in his book, The Double Helix, about it. Crick and Watson heard a rumour that Pauling was working on the problem of the structure of DNA. They raced ahead in their work because they were afraid that if Pauling actually put his mind to it, he was sure to solve the problem sooner rather than later!

This extraordinary mind of his is reflected by the wide variety of subjects of his nine patents. During the Second World War he patented an armour piercing shell. He did this work before he became an active pacifist. His pacifism got him into trouble with the US government and even a passport was denied to him at one time. His full passport was restored only at the time of his visit to Stockholm to receive the Noble prize.

When the US needed an instrument for reliably measuring oxygen content in a mixture of gases for assessing the quality of the air in submarines and airplanes, Pauling designed the Pauling oxygen meter, which was developed and manufactured commercially. After the war, it was adapted for analysing oxygen in incubators for premature babies. Pauling also developed an artificial replacement for human blood serum that may have saved many lives during the Second World War. He patented a method for increasing the critical temperature of superconductors (The temperature below which they become superconductors) and a method of drawing dissolved superconductors.

His other patents include those oriented towards the controversial side of his brilliant mind in the field of chemical-biomedical research. In later years, he campaigned for the medical uses of vitamin C. He insisted that a high intake of vitamin C prevents common cold, is a cure for common cold, cures cancers, and so on. He wrote a book titled How to Live Longer and Feel Better, which advocated very high intake of vitamin C.

This, along with his other activities such as frequent travels, pacifism, antinuclear stand, etc., made him fall foul of the Board of Trustees of Caltech and was made to step down as chairman of the Chemistry and Chemical Engineering Division. Amidst all these things, he published more than 1,200 papers and books. Around 850 of them dealt with scientific topics. The magazine New Scientist called him one of the twenty greatest scientists of all time.

Check out the next article in the series on Nobel laureates and their patents here: https://www.lexology.com/library/detail.aspx?g=38fcd04d-9c74-4992-a26f-a541c24ea91e