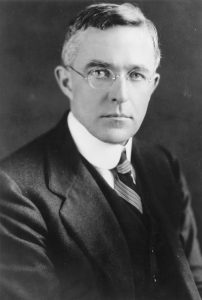 Scientists discover, publish, and get prizes – the Nobel Prize being one of the most prestigious. Inventors invent and patent their inventions. This is the world of discovery and invention, in a nutshell. However, often, scientists also invent and obtain patents. Sometimes the patents might not have anything to do with the work for which they have received the Nobel Prize. Let us now explore Irving Langmuir and his patents in this 1st article of the series on Nobel laureates and their patents.

While some scientists make discoveries in known fields of science, some create a whole new field of science or two. One among the latter kind was Irving Langmuir who launched the fields of surface chemistry and two-dimensional physics.

Langmuir was an engineer, chemist, and physicist. He got a Bachelor of Science degree in metallurgical engineering in 1903. He earned his PhD in 1906 in Göttingen. He later did postgraduate work in chemistry. Langmuir then taught at Stevens Institute of Technology until 1909 before he began to work at the General Electric research laboratory in Schenectady, New York.

His initial work at GE was the study of incandescent light bulbs. He improved the diffusion pump, which eventually led to the invention of the high-vacuum rectifier and amplifier tubes. Later, he discovered that the lifetime of a tungsten filament could be increased by filling the bulb with an inert gas such as argon. He also found that winding the tungsten filament into a tight coil improved the bulb’s efficiency.

As a part of this research, he experimented with introducing molecular hydrogen into a tungsten-filament bulb. He found that molecular hydrogen dissociated into atomic hydrogen and formed a layer that was one atom thick, on the inner surface of the bulb. This was the origin of his interest in surface chemistry. Further, his studies included various other phenomena. He studied the emission of charged particles from hot filaments, known as thermionic emission. He was one of the pioneers in the field of plasma and was the one who named it. Langmuir discovered electron density waves in plasmas that are now known as Langmuir waves. He used his discovery of atomic hydrogen by inventing the atomic hydrogen welding process – the first plasma weld ever made. Plasma welding has since been developed into gas tungsten arc welding.

He published, in 1917, a paper on the chemistry of oil films. This paper became the basis for his Nobel Prize award in chemistry in 1932. The Nobel citation mentions that he was awarded the Nobel prize in chemistry “for his discoveries and investigations in surface chemistry” and describes it as – “Further studies of oil films and other materials led him in 1917 to a theory postulating that surfaces resemble a chessboard on which every square can be occupied by only one atom or molecule. As a result, atoms or molecules that wind up next to each other can more easily react with one another.”

Apart from these discoveries, he was also a prolific inventor. He has more than 100 patents to his name. The varied subject matters of these patents show his varied interests and his keen, curious mind. The subject matters of his patents include electronic circuits, electronic devices, incandescent lighting, communication devices including picture transmission, vacuum pumps, signalling devices, to name a few. He also mentored, from an early age, another pioneering inventor, Katherine Burr Blodgett who was also a prolific inventor.

Irving Langmuir was awarded the Nobel Prize in Chemistry in 1932. He launched the fields of surface chemistry and two-dimensional physics. Anil Kumar, Senior Consultant, LexOrbis, introduces him and his work in the first of a series of articles on Nobel laureates and their patents.